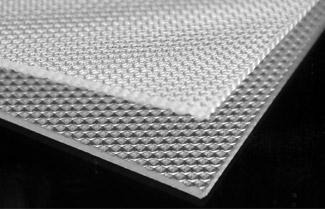 Then the principle of Side Lighting Diffuser Sheet is through chemical or physical means, when the light encounters two media with different refractive indexes on the way, the physical phenomena of refraction, reflection and scattering occur, through PMMA, PC, PS, Adding inorganic or organic light diffusing agents to the base of PP and other substrates, or artificially adjusting the light through the array of micro-features on the surface of the substrate, causing the light to be refracted, reflected, and scattered in different directions, thereby changing the path of light. To achieve sufficient dispersion of incident light to produce the effect of optical diffusion, light diffusion plates are widely used in liquid crystal display, LED lighting and imaging display systems.

The diffusion plate mainly causes great interference to the light, no matter how many degrees the light distribution curve of the original design is, as long as the light passes through the diffusion plate, it will change the beam angle to 160 ~ 176 °, so from the side, the board of the lamp There is a feeling of fog on the surface. From this point, it can be proved that the beam angle is as large as 160 ~ 176 °. It is strong proof that the larger the beam angle, the lower the illuminance, and some will also produce filtering, making some wavelengths unable to penetrate, resulting in Color shift, such as light interference treatment again on the surface, the light transmittance is lower due to the natural phenomenon of geometric optics, so the base material used to make the diffuser plate should be selected as low as possible, the interference of light will be Lower.

Our company still has UGR <19 for sale, please contact us.